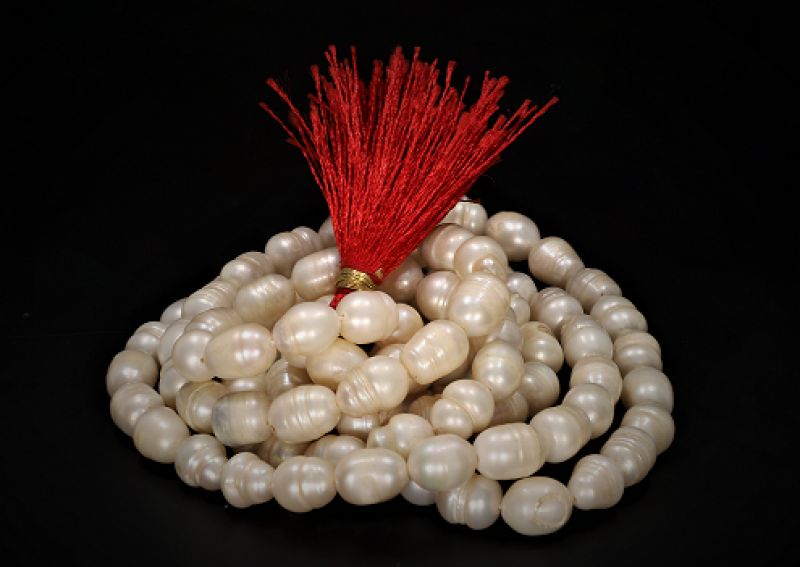 Buy Moti Mala online at best price. A moti mala is made of strings of radiant dabs, making a rich appearance. Then again, a Kundan mala highlights pins with fine glass encased in various shapes to give an illustrious touch.

In Indian astrology, the lunar planet or moon is considered a very important planet among the Navagraha, which influences the brain of an individual. The gem of the lunar planet is 'Moti' and it is the fastest moving planet among all the planets. If someone wears or keeps pearl beads or moti, the problems created by the moon begin to resolve as keeping the pearl gemstone makes the lunar planet very strong. Moti mala or pearl garland is the one that does not cause harm to anyone and benefits everyone, as an individual has to visit a pandit or astrologer to wear any other gem or stone.

Nowadays this Moti mala is sold as imitation jewelry and can be found anywhere, but it is not original at every place. This imitation jewelry is made of calcium carbonate, spices, and glass, which will cause damage to your monetary stability, mental stress and are likely to cause diseases. So one must know, if they are wearing an original Moti mala or not, that is the mala should have an original pearl or Moti. Otherwise, the individual will have to face losses and demotion. The gulf of Basra is the best among all the pearls. It is obvious that wearing an energized stone or mala will cause more benefits and each stone for pearl has a different way to energize them. Some people believe that washing the Moti mala in raw milk makes it pure and energized but according to the ancient Indian scriptures, it is not like that.

Moti mala is very beneficial for mental peace and mental illnesses, it gives relief to stomach or abdomen related issues, the person does not get angry over small issues and receive success in every task. Wearing pearl garland makes your mind stronger and stable, and maintains the balance of hormones in the body. Individuals who do business like cold drinks, fisheries, water, juices, travel, animal husbandry, and transactions from foreign countries for them this mala is considered as Raja yoga factor. For students, especially those who have taken arts, this Moti mala is very beneficial for them as it helps them in their academic life and provides success in their career. Wearing this pearl garland on full moon night helps in removing trapped money.

How beneficial is moti mala?

A moti mala is made of strings of radiant dabs, making a rich appearance. Then again, a Kundan mala highlights pins with fine glass encased in various shapes to give an illustrious touch.

Wearing of moti mala: anybody ought to wear pearl mala on monday on poornima; in hasta, rohini or shravana nakshatra. it ought to be worn in the wake of plunging it in gangajal and crude milk and subsequent to rehashing chandra beej mantra approx eleven thousand times. The moti mala ought to be one moti of two or four carats and ought to be worn at the time told by a certified crystal gazer.

The moti mala is a very versatile prayer accessory and carries many benefits. It brings peace of mind and happiness, soothes stress and tension, and pacifies passions. It is also beneficial for people suffering from dementia or other mental conditions. When used correctly, it attunes the 7 chakras and is said to bring wealth and happiness.

Wearing a Siddh Moti Mala is a way to attract positive vibes and energy to your life. This astrological jewelry is connected with the planet Moon, which is responsible for controlling the mind and emotions. Consequently, this pendant can help you to control your emotional instability and improve your decision-making abilities.

Its many benefits include increasing your self-confidence. It also repels negative energy forces and brings peace of mind. It is said to improve your relationship with others and attract prosperity. Siddh Moti Mala is an excellent choice for the astrological sign of Cancer. This necklace will also help you overcome past trauma and fear.

The Siddh Moti Mala contains 108 beads, one for each of the 108 mukhis. These 108 beads represent the moon, which is a symbol of prosperity and purity. The Siddh Original Moti Mala is said to protect the wearer from evil effects and has a positive aura. It is available online through trusted online marketplaces such as Astrology Remedies Store.

The Siddha Mala brings good energy and luck to the wearer and their family. It is also believed to reduce the negative effects of malefic planets. It is also used to help cure diseases and get rid of evil eyes. It is also said to help people gain spiritual awareness and enlightenment.

The Siddh Moti Puja mala is a beautiful astrological jewelry that has healing powers and promotes positivity. It is associated with the planet Moon, which is responsible for our emotions and mind. It helps us to control our emotions and improve our decision-making ability.

The Siddh Original Moti Puja Mala is the queen of all gemstones and is considered the symbol of innocence, purity, and prosperity. It is also said to nullify negative effects and protect us from evil forces. The Siddh Moti Puja Mala can be purchased from a reputable online store.

This gemstone mala is a beautiful way to honor the Moon. It can be hung on an altar or on an entrance door. When worn, it adds a charm to the room. If worn daily, it can enhance your intelligence and increase success in business. Wearing a gemstone mala is a good way to welcome the deities into your life.

A Siddha Mala contains a variety of Rudraksha beads. Many meditators wear it to enhance their spiritual growth and protection. It also protects against chakra imbalances. It contains the powers of several Gods, ensuring your happiness and success. Wearing a Siddha Mala is a great way to honor your loved ones, your friends, and yourself.

After the opinion of a qualified astrologer, the native may wear pearl mala. In the above cases you can buy Moti Mala (Pearl Mala) Ratna Mala online and get it delivered at your doorstep. Buy Moti Mala from ratanrashi meerut at best price.