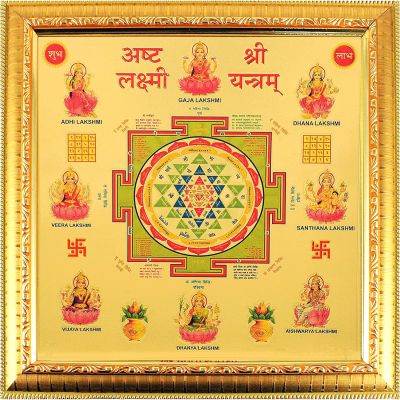 The Shree Ashta Lakshmi Yantra is an auspicious talisman that depicts eight forms of the goddess Lakshmi. These forms represent wealth, prosperity, health, power, and knowledge. They are particularly beneficial in bringing prosperity and happiness to a person's life. Many Hindus also use yantras as tools for meditation and spiritual practices. They are viewed in Hindu scriptures as having divine powers.

The Shree Ashta Lakshmi Yantra can be placed anywhere in your house or office. It is especially beneficial if placed near the entrance. It can also be placed on a table or hung on a wall. It is best to place it facing East, as the rising rays of the Sun and the heavenly vibrations of the East corner energise it. In addition, the mystical geometry of the Shree Ashta Lakshmi Yantra offers positive transformation energies to your life.

The Ashtalakshmi yantra has a central bindu that is surrounded by a sacred Shri Chakra motif. There are eight-petalled padmas surrounding the central bindu.

Adi Lakshmi, or Adi Shakti, is the ultimate mother goddess. She is the womb that carries all life and represents boundless nature. Her worship helps preserve the stability of life. The name Dhanya Laxmi, in Hindi, means purified food. The goddess provides the food with all the nutrients necessary to grow.

The Shree Ashta Lakshmi Yantra benefits include: It provides a powerful ray of energy, transforming negative energies into positive ones. The Yantra can be placed in the front or back of a home. It is most effective in the living room or reception. It can also be placed on a table or on a wall. It is best to place the Yantra facing the East, so that it can receive energy from the rising Sun and the divine vibrations from the East corner. The mystical geometry of the Yantra helps in providing positive transformation energies.

The Ashtalakshmi Yantra's design depicts the eight forms of Goddess Lakshmi. Each form represents a different aspect of the Goddess. It is believed that each form represents an aspect of prosperity and abundance, such as wealth, good health, progeny, and power. It is very helpful for those who want to improve their financial and material conditions. The Shree Ashta Lakshmi Yantra is also believed to remove obstacles in one's life.

Ashta lakshmi Yantra is considered to be a sacred piece of art that enchants its location where it is installed. It is a perfect item to hang near the entrance, living room, reception, or on a table. Ideally, the yantra should be placed facing the East direction, so that the rising rays of the Sun will energise it. It is also said to have mystical geometry, which will provide positive transformation energies to the user.

The Shree Ashta Lakshmi yantra is made of copper and depicts the eight forms of Lakshmi, as well as the Maha Siddha Jayant. When placed in a home, it will bring prosperity and happiness to the entire household. It is advisable to place it in your puja altar or prayer space.

The Ashtalaxmi Yantra is one of the most auspicious in tantric texts. Numerous devotees have vouched for its purity and iconographic precision. She is believed to bestow prosperity and wealth, and can also help you overcome financial difficulties.

Shree Ashta Lakshmi Yantra is devoted to Lakshmi. Ashta Lakshmi stands for the 8 Lakshmi, in detail it means Ashta is 8 and Lakshmi is the goddess, So, it is the 8 goddesses Yantra. As we all know the worth of money, the Hindus know the Lakshmi, the provider of wealth. Lakshmi is the goddess of Wealth, Possessions, Extravagance, Comfort, and Money. She guarantee’s the materialistic satisfaction and happiness of a human being. There are total 8 forms Ashta Lakshmi: Adi Lakshmi, Dhanya Lakshmi, Veer Lakshmi, Dhana

Lakshmi, Aishwarya Lakshmi. Now you might be wondering how this can make you wealthy and prosperous.

As wealth not only means money, it includes various other things too. Same, the Shree Ashta Lakshmi Yantra represents the 8 different incarnations of wealth. One needs additional factors to be considered as a rich man than just having money. You need Physical, Spiritual, Financial, and materialistic wealth (such as land, business, cars, expensive vehicles). A person who has all this is qualified to be called a wealthy man.

The Shree Ashta Lakshmi Yantra has a metal body. It is gold plated on five different metals, also known as Punch Dhatu.

The reason why they all are worshipped the Ashta Lakshmi is that an individual needs so that he is able to have all forms of wealth, such as health, knowledge, wisdom, success in life, and the Power.

Where should it be place?

Place the Shree Ashta Lakshmi Yantra faced to the north side of your house, and worship every day through chanting the Mantra at least 11 times with full concentration and heart. You can also place it in your Puja Ghar or Office. You can feel the good energy coming into your body and calming your brain, setting you at ease as soon as you start chanting the Mantra.