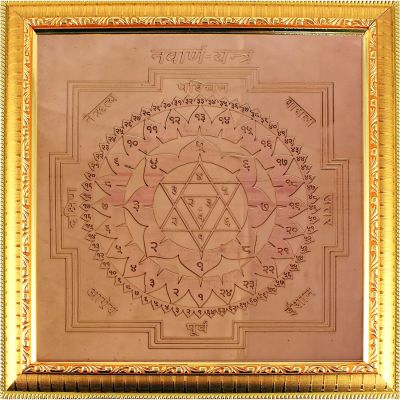 The Shree navarna yandra is a powerful tool for attracting the divine presence and achieving spiritual enlightenment. This sacred and powerful enchantment possesses the power of three goddesses: Mata saraswati, Mata laxmi and goddess Chamunda. The Navarna Mantra helps in eliminating obstacles in life and helps in maintaining physical and mental health.

The Shree navarna yandra is composed of the nine letters of the Vedic cosmology, which are related to the individual planets. Each letter contains a specific energy. The first word, Om, corresponds to the planets Moon and Sun, while the second word, Cha, is the planet Mercury. The sixth word, Daa, is related to Venus and Saturn.

The Shree navarna yandra contains the mantra, Aum Aing Hring Kling Chamundayai Vicchai, from the Markandeya Purana. The mantra is chanted 108 times a day. The Shree navarna yangtra is very beneficial for wealth, health, authority, and prosperity. It also helps in spreading happiness and positivity.

The Shree navarna yandra invokes the divine feminine. The sound is considered to be the ultimate brahman and is invoked before all other mantras. Its meaning is that all acts of our lives are acts of devotion. This realization is derived from intuitive experience and transcends all boundaries.Shree Navarna Yantra Benefits

Shree Navarna Yantra Benefits are many and diverse, and they are not just limited to promoting good health and wealth. This powerful talisman also provides the power of love, as it helps the wearer align with the divine forces of love. To obtain these benefits, people must follow certain rituals that are unique to their horoscopes.

The Shree Navarna Yantra is a three-dimensional, circular drawing of the trinity, and has three bindus, one representing the goddess Shakti, another for the deity Varahi, and a mixed one for the union of Shiva and Shakti. In addition to bringing good fortunes to the wearer, this talisman promotes a positive attitude, spreading love, and blessing others.

Chanting the Navarna mantra during Navratri is especially beneficial. This is because the goddess is extremely conscious on this day and it can help prevent negative energy from coming into the wearer's aura. Additionally, if you chant it during Navratri, your sadhana will be more potent and fruitful.

The Shree navarna yandra is worshipped in many traditions. It is also worshiped by other deities. This tantric artifact represents the supreme spiritual union of Shiva and Shakti. By performing the Shree navarna yantra in a devotional setting, you are worshipping the highest possible force in the Tantrik form.

There are many different ways to use the Shree Navara Yantra for its meditative properties. Traditionally, it is placed in front of the heart. This is an excellent way to invoke the Goddess' presence and invoke her blessings. In addition to that, it is an excellent way to bring prosperity and peace into your life.

Yantras are symbols of devotion and are found in a wide variety of art forms. They are sometimes used in charms or other products. In a puja, a yantra will be placed facing the worshiper. If the worshiper is facing south, the yantra will face the south or west.

The Navarna Yantra is one of the most powerful Yantras of maa durga. It is used in worship before sunrise and is said to pacify the Navagrahas' sufferings. It also provides strength, courage, and confidence.

There are many different forms of the Shree Navara Yantra. It has nine Avaranas, or presiding deities. The closest is the Devi Kamakshi of Kancheepuram, as described in the scriptures. The Shree Navara Yantra can be found online and in local stores, but it is always best to visit a store to make sure you have the correct one.

The goddess Chamunda is a manifestation of the mother goddess. It is closely related to the goddess Kali and is called Chamunda Kali.

Navarna Mantra helps eliminate life obstacles and increase the raiders' significance in the world. The Navarna Mantra is very powerful because it helps the chanter to preserve prosperity, wealth, joy, and happiness. This mantra also helps maintain health.

The name and fame are also achieved if the mantra is routinely recited. This spell protects the chanter to fight evil spirits and negativity.

Shakti navarna yantra contains power of Mata saraswati, Mata laxmi & kali. It is used to worship mother goddess. The yantra comprises of the navarna beej akshara of the holymother.

In navarna mantra the first word is “Aem” -it control the surya planet.

Second word is “Heem” which control the lunar planet.

Fourth word is “Cha” which control the power of mercury.

Fifth word represents the “Muh” which suits the Jupiter.

Sixth word represent the “Daa" which controls the planet Venus and calms her suffering.

Eighth word is “Vii” .It keeps the planet Rahu under its occupation.

The ninth word which is “Chee” .which represent controls Ketu planet and frees it from its suffering.

They are worshiped sequentially from the first day of Navratri to the ninth day.

This navarna yantra of goddess is extremely miraculous

These nine powers of Durga are also helpful in the attainment of Dharma, Artha, Kama and Moksha.The Navarna Mantra should be performed thrice in a garland and it is considered better if the garland is always of rhinestone.

Always install the idol of Mother Goddess on red clothes and start worshiping with ghee.

The imbalance of the Navagrahas ends.

It's all about the Navarna yantra.